The article below was originally published in the Apil 2021 edition of TVTech, page 29.

PORTLAND, Ore. – Sinclair Broadcast’s KATU, the ABC affiliate in Portland, Ore., and sister station KUNP, a Univision affiliate, serve not only the Portland market, but much of the northern half of Oregon and Southwest Washington state as well.

As chief engineer for KATU and KUNP for the last six years, I’ve been responsible for station operations and evaluating and purchasing equipment. Ultimately, it’s my job to bring the best viewer experience to our audience via high-quality programming delivered on the most cost-effective advanced, reliable broadcast systems available.

We recently built a new production control room, starting off with a blank slate. The project involved demolishing a storage room, adding walls, electrical, furniture, pre-wiring for all the systems and purchasing an automation system and robotics, all while staying on the air with 10 hours of live and taped programming a day – and staying within budget. We served as our own system integrators and began searching for the right equipment. 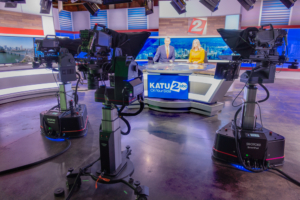 The fixed cost was the automation system. Since we replaced our automation platform with a current model, it was imperative that whatever robotically controlled camera system we chose was compatible. The variable was the robots. We concluded that we might be able to build and purchase everything we needed if we used two moving pedestals and one stationary one, rather than the three moving ones we previously used.

Our engineering team researched to find the best system at the best price. We looked at tracked, roller ball, wired and wheeled systems – just about every type available. We contacted every company that made robotic camera systems, and after much deliberation, we settled on Shotoku USA.

After discussions with Matt Servis, robotics support specialist with Shotoku USA, and the rest of my team here at KATU, with extra collaboration and input from our lead project engineer Justin Gurrad and KATU maintenance engineer Cody King, we came up with a plan.

The core of our system includes two SmartPed X/Y robotic pedestals, perfect for our current and future productions with plenty of features that will allow us to extend operations as needed. The robots are fully integrated with TG-18 Pan/Tilt heads and feature a high payload capacity, ideal for our current setup.

We also installed a fixed position camera on the TG-18i Pan/Tilt head with TI-11 elevator pedestal, which as a cost-effective solution for the third camera. The entire system is managed by the TR-XT control system, which has extensive high-end features. A fully configured database server syncs our control room and studio computer back together, eliminating back-up concerns.

We are also using a Shotoku controller for two other Panasonic PTZ cameras, so we now have one control panel for all cameras. They also built a lens drive system compatible with our stations’ legacy studio lenses. That one feature saved us a significant amount of money that we were able to put towards the control room upgrades.

Our production and engineering crews, here at KATU and KUNP, were all impressed with the simplicity and ease-of-operation of this new Shotoku system.

The article below was originally published in the Apil 2021 edition of TVTech, page 29. KATU Portland Adds Shotoku Robocam […]

The article below was originally published in the Apil 2021 edition of TVTech, page 29. KATU Portland Adds Shotoku Robocam […]