Broadcast quality coverage of legislative bodies is a long-standing application that has seen widespread growth over recent years and is now a service to which citizens the world over have, or expect to have, access.

Installing TV cameras in parliaments is not new, most large national and international legislative bodies have televised proceedings for many decades, but the content was traditionally recorded and used for archive or news-worthy edited highlights.  Over the last 10-15 years as TV distribution became digitised and more bandwidth was available, dedicated parliamentary TV channels began to appear.  These carried not just highlights but live broadcasts of entire debates or hearings.  More recently with on-line streaming of broadcast quality channels this trend has only increased.

Live TV broadcast of proceedings is now seen as an important public service by most democratic societies.  Lawmakers have always made decisions that change people’s lives, but through 2020 and as we start 2021 these decisions became more immediate and important in people’s minds so the level of engagement reached levels rarely seen before.

TV coverage of proceedings requires two things: high quality images, and reliable systems.  Getting cameras into positions where they are needed requires remote cameras.  Shotoku leads the world in providing high-performance remote camera systems for national parliaments.  Cameras get smaller, but shooting distances, and environmental lighting, still demand a full-size powerful zoom ratio broadcast lens.   This type of package requires a remote pan and tilt head like the TG-27, capable of carrying the load but also of perfectly smooth motion at tight zoom angles.  Shotoku has installed these systems over decades at high profile national parliaments such as the USA, Canada, UK, European, Korea, Singapore and countless others around the world.

Technical equipment is often installed in tucked-away places within historic buildings; service access is sometimes difficult and usually impossible during live debates which can last for many hours.  Shotoku has designed devices and system architectures to prevent failures, ensuring systems remain fully operational even after years of constant use. Resilient IP networking, distributed architectures and dedicated hardware panels ensure downtime is minimal.

When systems are operated under such conditions it’s vital that control systems are easy and comfortable to use.  The TR-S control panel and Orchestra automation system work seamlessly together enabling operators to rapidly acquire shots and always keep perfect framing.  Smooth and reliable motion of the TG-27 pan and tilt heads combined with ease of operation of the control system make operating the systems for long hours comfortable and uncomplicated.

The best systems are the ones nobody notices – parliamentarians should not be distracted by remote heads, and viewers should not be aware of the camera movements.  Shotoku has proven systems to satisfy these demands and has a global installation base that reflects that. 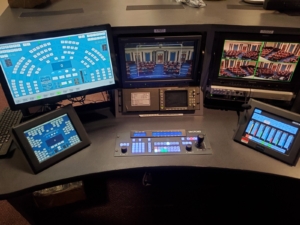 Shotoku - No Robot is an Island